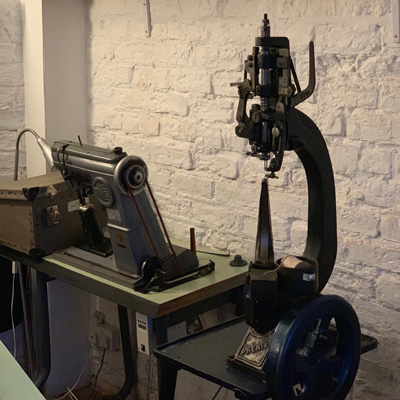 In the last blog post I spoke about many pains that I’ve gone through caused by degenerative designs of factory made shoes. If you haven’t already, feel free to give that a read so you can understand why I am writing this blog in the first place. In this chapter I will continue my story on how I came across minimalist footwear, and particularly bespoke minimalist dress shoes.

I. Born To Run

I set out on a mission to permanently resolve the pain in my body caused by degenerative shoe designs. It didn’t take much browsing online to come across best selling book “Born To Run” by Christopher McDougall. Upon reading, I learned about the Tarahumara tribe. I was baffled to learn that many members of this tribe, older or younger could run about 400 miles non-stop. I was intrigued to learn that the human body was literally “built to run” and that humans can out-run any animal in a long distance run in nature. The book taught me that this is possible because homo sapiens can sweat more efficiently than other mammals. Furthermore, when we run on two feet our posture doesn’t constrict our lungs like it does for four legged animals when they gallop. Because of these fascinating god-given traits that we possess, prehistoric humans were often able to literally chase prey until they were physiologically unable to run anymore–ultimately using whatever tools they had to slaughter the animal and secure their calories for the coming days.

If you’ve never read the book before, you may wonder: “Why do so many runners get injured?” I had the same question when I first read the book. I could barely run half a mile without my body screaming to take a break; I also remember plenty of my friends from my track running years who had hip injuries or the like. According to the book, the trick is that the Tarahumara run barefooted. They don’t wear any cushioning on their feet that inhibit movement and cause lazy, weak muscles. I learned that running barefooted with no cushioning also allows the body to become more sensitive to the surfaces that you’re running on, and will allow the body to make adjustments with every step, ultimately changing your gait and improving your posture and allowing you to run for much longer distances with minimum injury risk. It all sounded quite unbelievable, but I had to give it a try.

Like the young men I encountered at the park some time ago, I too started to walk barefooted each time I went exercising outdoors. On my first day experimenting with barefoot walking, I immediately felt the benefits. My ingrown toenail didn’t hurt as much, my ankles and knees and hips felt more balanced, and I felt energized rather than exhausted like I usually did. Quite astonishing to say the least. I started telling my friends, family and colleagues about the new book that I read and my positive experiences. Most of them just acknowledged what I shared but didn’t take action to try it out. At least my wife was happy for me. She knew most intimately the pain that I go through on a daily basis. Obviously I couldn’t go to work barefooted. Thus, buying minimalist, zero-drop shoes became the new norm, but as you may have guessed, there were no barefoot minimalist shoes that really looked neat and professional–or so I thought.

Being in sales, my colleagues often teased me about my bizarre looking minimalist shoes; I however, knew what was good for me and didn’t want to compromise my health to fit in anymore. As luck would have it, not long later, I came across The Last Shoemaker brand at a trunk show. Allan, the cofounder, introduced me to bespoke (custom made), hand-welted dress shoes. He explained that hand-welted shoes sit closer to the ground with minimal room between the in-sole and the out-sole, allowing the shoe to be welt-stitched together. This process, as he explained, makes the shoe more responsive, allows you to feel grounded, and is more flexible and overall more comfortable. He explained that hand welted shoes are also more durable since they welt-stitch instead of glue the shoes together. Allan’s explanation sounded uncannily similar to what was described as the ideal shoe in the minimalist community. I had to ask Allan if he knew anything about minimalist shoes. He clarified that The Last Shoemaker brand was about to release a new line of minimalist bespoke dress shoes, and that all I had to do was to get my measurements done so that they could create a last (wooden model of my foot) for me, upon which they would use to manufacture the shoe from scratch. I didn’t need much more explanation. I had my feet measured on the spot.

In this blog post I spoke about my formal introduction to minimalist shoes AND bespoke dress shoes. If you want to hear more about my experiences with bespoke, you can find all of the chapters of my blog series “A Bespoke Story” here.